Transforming the ship Galeb into a museum

The motor ship Galeb - a notable protected cultural monument, will become a museum which collection will match up with the programme line “The Age of Power" within Rijeka European Capital of Culture 2020, that addresses a critical review of all totalitarian regimes that have left mark on Rijeka.

Tourist Valorisation of Notable Industrial Heritage Monuments of Rijeka is a three-year project implemented by the City of Rijeka, in partnership with the University of Rijeka and the Rijeka Tourist Board. The programme is implemented through renovation and putting into operation two remarkable protected cultural monuments – the motor vessel Galeb and the Sugar Refinery Palace, within the former industrial complex Rikard Benčić.

For the renewal of the ship “Galeb” and the baroque mansion, administrative seat of the former Sugar Refinery, following a tender, a grant in the amount of HRK 69 million was approved under EU funds in favour of the City of Rijeka.

Purpose
The concept of a permanent and occasional museum collection aboard the ship “Galeb” was drawn up with the intention of making the museum collection attractive to the widest range of visitors and to all age groups. The permanent collection aboard relates also to items that have remained preserved from the original ship. The intervention of designers and curators in these premises will be directed at presenting and preserving the symbolic value that the ship possesses. 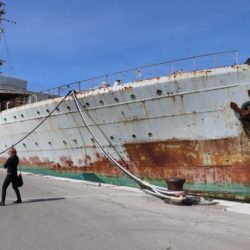 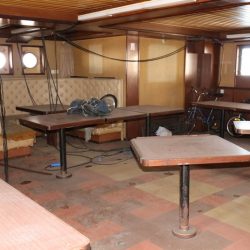 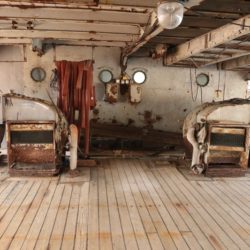 Once the reconstruction and equipment have been completed, for which a project has been prepared by the company Marine and Energy Solution DIV, the ship Galeb will be primarily put into service of culture, in addition to premises dedicated to the permanent collection, the ship will host exhibition premises, a cinema, and various creative workshops. Some premises aboard the ship Galeb will have a commercial function, so that the ship will have a hostel, a restaurant / bar and a souvenir shop.

In addition to ship infrastructure, the permanent collection will be enriched by exhibitions aimed at showing the dynamic history of the ship Galeb and the city of Rijeka. The project envisages that the ship will remain moored in the port of Rijeka and that her rich contents will fit into the cultural and artistic trends in the city of Rijeka. By implementing the project, the ship will become a tourist attraction of a cultural character. The inauguration of the ship as a new cultural and tourist content will encourage the creation of new jobs in the cultural sector.

Owing to the project relating to the transformation of the ship into a ship/museum, the ship will be entirely kept and the basic character of her space will be kept as well.

Hence, the idea is to transform the ship Galeb into a museum that will offer visitors a story about the regime and time that the ship symbolizes even today, not only in the context of former Yugoslavia, but also much wider, and also the story of maritime history since the ship Galeb is exceptionally interesting in that sense. In addition, the ship Galeb will have accommodation and restaurant capacities, occupying less surface than the museum premises. Namely, it is planned that the museum and public premises will occupy approximately 4000 square meters of the ship, while accommodation and restaurant capacities just 1000 square meters.

The ship will be a museum that, thematising her own history, will speak without idolatry about all the regimes that Rijeka has gone through.

The museum programme will match up with the programme line “The Age of Power” within Rijeka European Capital of Culture 2020, that addresses a critical review of all totalitarian regimes that have left mark on Rijeka. The ship Galeb will be located next to the outer breakwater (Molo longo).

Most of the ship decks will be public spaces intended for citizens, whether of not they entre the museum, and there is also a plan to refurbish premises aboard that will be used by Rijeka-based associations. For the restaurant and accommodation capacities, concessions will be awarded.

Since the ship is cultural heritage, the Conservation Department in Rijeka requested that certain spaces be left in their original condition, with the necessary reconstruction and restoration according to archival documentation, with permission to place in the protected inside and outside spaces non-invasive elements that will describe the function and ship history.

The museum holdings will include all existing ship equipment, existing illustrative materials, such as photo and video materials, copies of documentation relating to the construction and history of the ship, archives of articles, books and other textual supplements related to the ship Galeb. Visitors who once sojourned and worked aboard, will be able to leave a video of their experiences, donate documentation and exhibits.

The collection will contain a number of interactive contents and questions, and the open decks will restore their old glory owing to the renovation of the wooden floor made of teak, lighting and awnings, with modern museological additions.

The ship museum will be adapted for people in wheelchairs, as well as for blind people for whom the route will be indicated by stripes, while special points are planned in the collection – Braille tiles, hearing stations, relief tiles showing selected illustrations and exhibits that can be felt.

Visitors will be able to see the most luxurious residential parts, completely restored, such as Tito’s and Jovanka’s apartment, the common lounge, guest apartments, the main lounge, the dining room and large guest lounge, the dressing room and bedrooms. Interactive contents are also planned aboard, so that in the former dining room for guests, dinner will be projected featuring once famous people who sojourned aboard.

The ship Galeb has a long history and her restauration into a museum would be her fourth purpose. The ship originally named “Ramb III” was built and launched in 1938 at the Ansaldo shipyard in Genoa, Italy, functioning as a transport ship. At the beginning of the Second World War, the ship was transformed into a warship, first as an auxiliary battle cruiser. After the surrender of Italy, the ship was taken over by the Germans and they named the ship Kiebitz and built in mine rails. During 1944, the Kiebitz laid more than 5,000 mines in Kvarner and the northern Adriatic. On 5 November 1944, the ship sunk in the port of Rijeka hit in Allied bombing. She was raised in 1947 by the company Brodospas from Split. After reconstruction at the Pula shipyard “Uljanik”, the ship was included in the navy as the school ship Galeb. In 1953 the ship became the residential yacht of Tito. The layout of rooms and equipment was adapted to this purpose.