Importance of the project:

The broader context of the project: the Rijeka intermodal corridor as part of the Mediterranean TEN-T corridor, basic network of European corridors 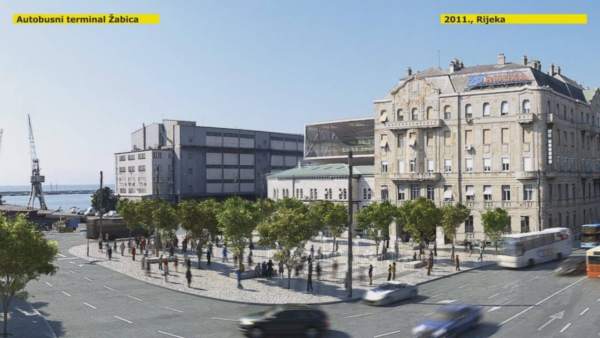 URBAN AND TRAFFIC REVITALISATION OF THE RIJEKA DOWNTOWN AREA

Parts / phases of the project:

The project covers a major part of the surface of Jelačić square (with the exception of the existing pedestrian part of the square), which today is mainly intended for road and stationary traffic (suburban bus terminal for the western part of Rijeka), and only a minor part for pedestrian traffic, (narrow sidewalks at Jelačić square, Fiumara street and Scarpa street).

Attempting to adapt the city centre to pedestrian traffic as much as possible while strengthening the importance of city public traffic (as determined by the general urban plan), we are approaching change in the vehicle circulation regime / implementation of a new “yellow lane” “reserved for public transport in the following sections:

Since Adamić street is located in the centre of the pedestrian downtown zone, and will be intended exclusively for public transport, with this solution we achieve traffic flow of public transport in the city centre, increasing its overall attractiveness for citizens. The final objective of this intervention, as well as of other traffic regulation interventions in the downtown area and outside, is aimed at achieving distribution between public and individual traffic in the proportion 60% : 40%.

With the new architectural solution, the square is conceived as an area full of greenery, fountains and benches for relaxation. The part of the square reserved for traffic is divided into two directions, each with three traffic lanes. The outside lane is intended for taxis. This transport solution is based on the fact that Riva street becomes two-way for all vehicles, while Adamić and Trpimir streets become roads reserved for public transport and delivery vehicles. The new transport solution for this main city artery and for access to the bus terminal complex, which includes a garage with about 900 parking spaces, will significantly reduce air pollution in the downtown area because it allows personal vehicles to be parked on its edge.

Construction of the Western Žabica Complex

The extension of Riva street for a total length of about 400 m. It is a four-lane road, with the strip for the division in the centre. At the southern end, a protective green belt separates the road from the relocated railway line. The extended Riva street on the south side is intended for the entrance and operation of the bus terminal in this phase of development.

Owing to the project, the connecting road leading from Žabica square to the Mlaka area will be built, which serves for the operation of the new integrated passenger terminal for long-distance traffic and its connection to the city road network. The road represents the extension of the current Riva street to the west and is designed with four lanes. Almost half of this section is relevelled and passes under the railway station Rijeka and connects to Krešimir street. The new four-lane road is located where at present there are railway tracks – it is planned at the entrance to the bus station, followed by a tunnel section under the rail network of the railway station.

Evaluation of the traffic situation

Part of the whole project is the drafting of professional fundamentals for the evaluation of traffic conditions in the city. In the context of this project, traffic analysis, which includes spatial-environmental components, is particularly important. In order to evaluate the achievement of the objectives set by the project, it is necessary to periodically evaluate the traffic situation. Therefore, in November 2019, the preparation of a document of the same name (Evaluation of the traffic situation in Rijeka) was started, coordinated by the Department of Development, Urban Planning, Ecology and Land Management and prepared by the community of bidders – company Rijeka promet and company SZ Elipsa, Zagreb.

Professional fundamentals will include:

The results of this analysis are very important because they will provide an overall assessment of the state of the transport system and mobility in the city of Rijeka, with an emphasis on the critical parts and parts of the system that will require priority solutions.

The second part of the professional fundamentals concerns the definition of the indicators of sustainable development of the transport / mobility system and the drafting of a plan for periodic data collection.

Completion of key professional documentation is expected in the second half of 2020.