The Children’s House in Rijeka is the first such house in Croatia, and its specific is in the method of work with children and parents who will spend there their time and in the areas of work and topics that children will be able to deal with there. 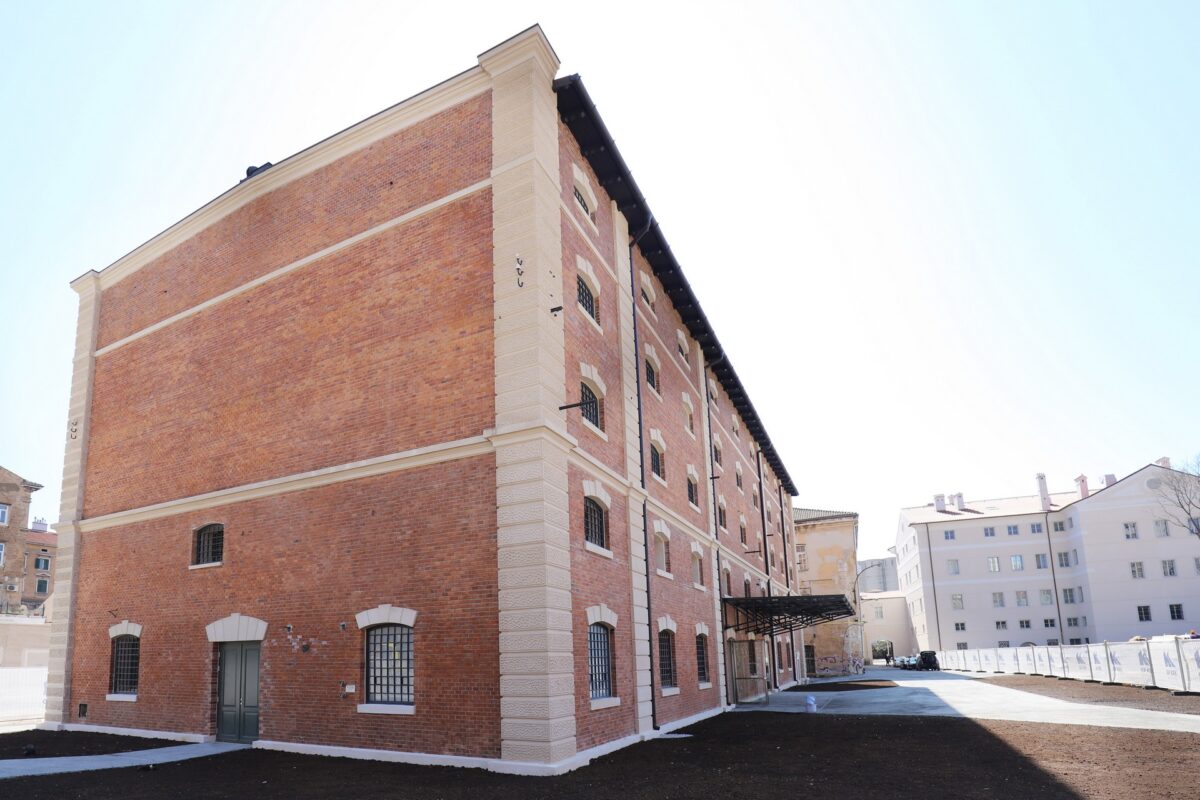 Rijeka is the first city in Croatia that has built a large house, beautifully decorated, cheerful and full of creativity, entirely intended for children.

Puppet shows, children’s films, many children’s books, exhibitions, creative workshops – all these and many more topics – make the contents of the Children’s House, which after two years of construction, proudly opened its doors towards the end of March 2021,.

The creative potential that pulsates behind the walls of this house is one of the most beautiful tales narrated in Rijeka by the European Capital of Culture – because it is intended for the most beautiful and dearest: the children of this city and its wider surroundings.

And the story began with the preparation of the project, seeking funding for its implementation and the candidature of Rijeka for ECOC, and the application book in which the Children’s House found its place as a programme unit and as a physical building.

The transformation of the Brick Building making part of the former industrial complex Rikard Benčić into the Children’s House of the cultural quarter was carried out as part of the project titled “Revitalisation of the Benčić Complex – Brick and T-Building”. This project is funded by the Structural Funds and the European Regional Development Fund under the Operational Program “Competitiveness and Cohesion” 2014-2020. The total project value amounts to HRK 162.1 million, out of which the amount of HRK 68.2 million was financed by EU grants, HRK 10 million was financed by the Ministry of Regional Development and EU funds, and the residual amount was financed from the budget of the City of Rijeka. The total amount invested in the construction of the Children’s Home totals HRK 45.4 million, out of which HRK 29.2 million was financed by an EU grant. HRK 9.2 million was invested in equipping the house, and these funds were fully financed from the budget of the City of Rijeka.

The author of the project Children’s House is the famous Rijeka architect Saša Randić. He once described it as a “Magic Box” inspired by “Alice in Wonderland”, in which visitors gradually discover its secrets. That is what the Children’s House really is – it is a house within a house because it was inserted into the existing brick building of the former factory complex Rikard Benčić due to the manner it has been constructed. And by entering it, everyone can feel Alice in Wonderland for the first time, because such a cultural centre for children, with such a wide range of activities and so high quality, up-to-date equipment and bright, colourfully decorated centre – has not existed in Croatia to date, not even in the nearby surrounding countries.

The design of the Children’s House and its construction from the beginning were aimed at preserving the specific brick exterior of this building. The children’s magazine Brickzine, created as part of the European Capital of Culture project, with its name (brick) additionally drew attention to the moment when a new and unusual tale was being created around the brick building in Benčić. Massive facade walls made of solid brick, opened with smaller openings, remained the main external structure of the house and the original, recognisable element of the former factory building. The new interior walls of the house were built on a new foundation and thus the whole house was rebuilt – inside the brick house. The original cast iron pillars and beams were also used in the construction, the windows were replaced with replicas of the original iron windows, and the interior of the house was designed to meet the needs of children and space for programme activities in the Children’s Home.

The entrance atrium of the Children’s House is a spacious and free living room, a unit where children can stay with their parents and have fun without a pre-planned arrival or enrolment in a particular workshop. There is also a coffee bar, and on the ground floor there is also a cloakroom, sanitary facilities, and passages to the stairs leading to the upper floors.

On the first and second floor there is a multi-purpose hall with 75 seats, a large projection screen and a stage. It is intended for children’s films projections, performances of children’s plays, music programmes, literary evenings and various other activities. This multi-purpose hall also serves for watching children’s films that children will create themselves, but also for projections of films adapted for children with disabilities.

On the first and second floor, next to the Hall, there are also workshop premises. On the first floor there is the Backstage Hall, the Bridge that once the renewal has been completed, will connect the Children’s House and the MMCA building and a gallery, and on the second floor the Cinema Studio and the Stribor Forest. The workshop premises have the potential to bring both parents and children together in creative processes and are the heart of the creativity of the Children’s House, and the programme contents that these premises offer include, among others, media literacy of children of the 21st century, born in the world of digital technologies.

On the third floor of the Children’s House, Stribor, the children’s literature department of the Civic Library, found its new home, more luxurious and three times larger in size. With the new spatial possibilities, new contents are opened for small members of Stribor, furthermore, in the future Civic Library, a department for youth will be formed and in that way the literature for young people will be appropriately divided from the literature dedicated to children.

And finally, on the roof of the Children’s House, there is a Container – a space for various activities, including performances, and a terrace offering an unusual view of the roofs of nearby houses in the neighbourhood.

The hall of the Children’s House will provide young people from Rijeka, as well as those older ones, a unique and unrepeatable cinema experience. The hall is equipped with state-of-the-art equipment for image and sound reproduction, i.e .a laser 2k projector and a corresponding lens for 3D projections, as well as Dolby Atmos surround sound technology. With this, Rijeka is also the first in Croatia to have Dolby Atmos technology, as a major technological step forward in the experience of sound, compared to classic cinema. The hall also has many technological innovations such as, for example, an integrated sound system intended for the hearing impaired.

Additionally, the Atmos sound system is the most advanced technological system for multi-channel sound reproduction that currently exists, it is the backbone of this technology, and at the same time the fundamental difference compared to traditional surround systems is the propagation of sound in the vertical direction. Two smaller recording and editing studios are equipped with a chroma key surface for visual effects and compositing, two 4k camcorders, 2 robotic cameras, various types of microphones for each purpose, 6-channel audio recorder and audio mixer, LED lighting system on a supporting structure or racks of 12 LED panels with associated control, video mixer with control panel for creating a virtual studio and live broadcasts, and other necessary equipment and software for workshops and other programmes.

These premises and equipment enable the implementation of various educational programmes, from “classic” feature and documentary films and TV reports and radio podcasts, to digital 2D and 3D animation and roles.

The programme is jointly devised by four city institutions

All programs, workshops and activities that will be carried out in the Children’s House are jointly devised, organised and implemented by four city cultural institutions Art cinema, the Rijeka Civic Library, the Rijeka Puppet Theatre and the Museum of Modern and Contemporary Art. Along with them, associations and independent organisations such as the Benčić Youth Council will work closely together, and mentors who have special knowledge and skills in certain areas and who will guide and children in creative processes will be included in the programmes.

This approach when working with and for children, in which the cooperation of various institutions opens up completely new creative possibilities, is a unique example in Croatia. This model was mostly visible when the Toboggan Children’s Festival was organised and implemented, and is also visible in Brickzine magazine, both in its print and online editions.

Owing to the construction of the Children’s House the facade of the Brick Building, industrial heritage of Rijeka has been preserved

The brick building was built in the late 19th century as part of the then Royal Hungarian Tobacco Factory on the site of two older buildings. According to a depiction of the complex dated back to 1875, there were two smaller buildings on the site of today’s Brick Building, one of which was a mill on the Brajda stream. It was originally connected by bridges to the H building on the south side and today a demolished building on the northeast side. After the Second World War, the brick building became part of the newly established ship’s machinery factory “Rikard Benčić”. With the collapse of the factory, in the 90s of the 20th century the building was abandoned. Its architectural and historical value lies in the fact that it is an example of industrial architecture of the late 19th century and the typology of warehouse buildings built at that time.