Owing to the investment of the City of Rijeka, the beautiful baroque palace within the former industrial complex “Rikard Benčić”, has been completely renovated and transformed into a new seat of the Rijeka Civic Museum.

Thus, the former administrative building of the old factory, which began its life in the middle of the 18th century as a sugar refinery, has become a prominent museum space that in its permanent display glorifies and represents the turbulent history of Rijeka, an also an interesting history of the Benčić complex that over centuries apart from being a sugar refinery also served as a tobacco factory and finally “Rikard Benčić Motor Equipment Factory and Foundry”.

Within the European Capital of Culture project, the City of Rijeka has refurbished and renovated the Sugar Refinery Palace, among others, owing to EU grants. Namely, after a number of various commissions had recognised this Rijeka project as a valuable cultural project, almost HRK 69 million was approved in favour of the Rijeka City Administration for the refurbishment of the Palace and the ship Galeb, which will operate as a branch of the Rijeka Civic Museum.

The Rijeka Civic Museum in the renovated Sugar Refinery Palace was opened on 13 November 2020, after years of preparation. Namely, although the construction works on the renovation of the Palace started in 2018, they had been preceded by extensive preparatory works.

Namely, the City of Rijeka, after the closure of the factory became the owner of the Palace, over the years, in cooperation with conservators, a series of preparatory works were carried out necessary for its final restoration, reconstruction and transformation. A number of experts took part in these works, like architects, art historians, restorers for wall paintings, stucco works, kilns, etc.

Many experts consider the sugar refinery to be one of the most beautiful baroque palaces in Croatia – prominent premises with its interior of rich decorations, wall and ceiling paintings of mythological and historical contents and panoramas of imaginary cities. 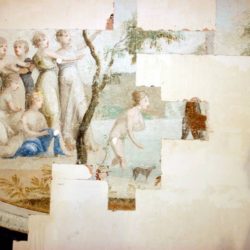 The history of the Sugar Refinery Palace

Since 1970 the Sugar Refinery Palace has been a protected cultural good. This monumental building was built in 1752 for the needs of the administrative building of the sugar refinery, and it makes integral part of the industrial complex that testifies the industrial development of Rijeka in the 18th century.

After the fire of 1785, the building was significantly reconstructed and equipped with baroque interiors with wall paintings and stucco works. In 1851, the building hosted the management of the Tobacco Factory, and after 1945 it changed its purpose again and became the seat of the “Rikard Benčić” Motor Machines Factory.