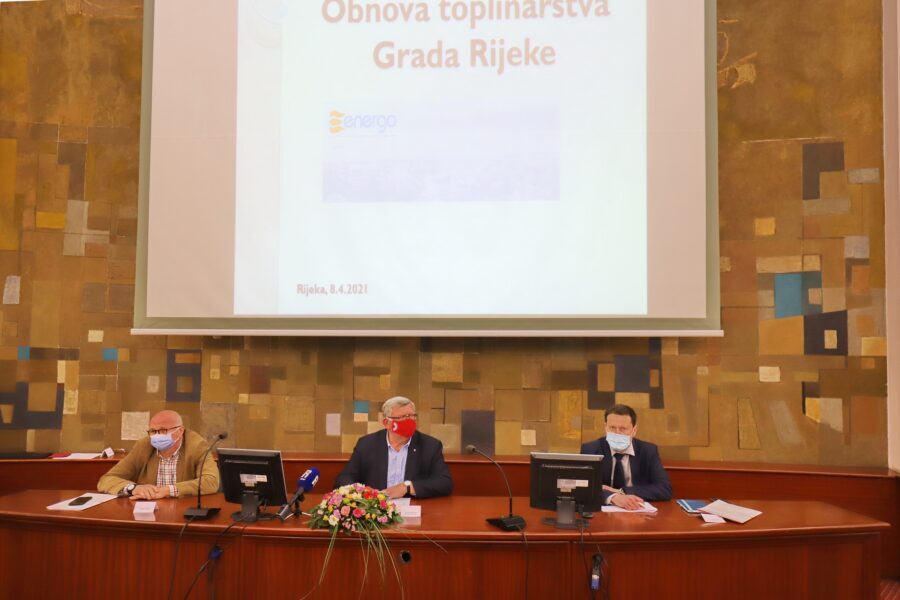 The project promoted by the company Energo worth HRK 106,924,107.46 was presented in the City Hall of the City of Rijeka titled “The renewal of the heating system of the City of Rijeka” for which an EU grant has been provided through the Integrated Territorial Investments (ITU) Mechanism within the Rijeka Urban Agglomeration.

Funds aimed at project realisation have been provided under the Cohesion Fund, operational programme Competitiveness and Cohesion.

The total project value titled “The renewal of the heating system of the City of Rijeka” amounts to HRK 106,924,107.46, while the approved EU grant amounts to HRK 83,893,707.80. The project includes investment in the modernisation of production plants (heating plants) and the renewal and construction of a hot water distribution network. This is the last project within the ITU mechanism of the Rijeka Urban Agglomeration, whereby all funds have been contracted practically out of somewhat less than EUR 50 million under the operational programme Competitiveness and Cohesion 2014-2020 for projects within the Rijeka Urban Agglomeration.

In the period from 2017 to 2021, we contracted 140 European projects worth EUR 552 million of which a little less than EUR 300 million were grants, while the rest was provided from the City budget or the budgets of utility companies. Some projects have been realised, part of them are in a late phase of realisation, and the rest will be completed by 2023. Although this will be discussed separately, regardless of the fact that in the current election campaign various rumours are spread, I leave to my successor a lot of work done and money provided”, said the mayor and added that that investment project would not burden citizens or Energo services users.

In December 2014, the Operational Programme Competitiveness and Cohesion 2014-2020 was approved in favour of the Republic of Croatia, within which, Specific Objective 4c3 – Increasing the efficiency of the district heating system, under the European Regional Development Fund (ERDF) EUR 80 million grant was provided for the reconstruction of the existing district heating systems in the Republic of Croatia.

Energo as a component of the Rijeka Urban Agglomeration, put up the project relating to the renewal of the heating system in Rijeka.

The project concept was approved in February 2020 by the competent body of the EU Commission (DG COMP). At the beginning of 2021, positive opinions were received as well as the Financing Decision.

By completing this project, Energo will be able to offer a lower thermal energy price, and the final effect of this project will depend in part on the end users who will have to be willing to invest in the infrastructure they own in order to achieve maximum efficiency.

With the renewal and reconstruction of 7.9 km of the existing hot water distribution network, 2.5 km of the new hot water distribution network will be built. Three heating systems in the eastern part of the city (Gornja Vežica, Vojak and Donja Vežica) and three heating systems in the western part of the city (Malonji, Zamet, Krnjevo) will be merged into a single system.

In the heating plants Gornja Vežica, Malonji, Zamet and Srdoči, cogeneration devices for the simultaneous production of heat and electricity as well as solar collectors for the production of heat from renewable sources will be installed. Thermal energy tanks will be installed in these heating plants in order to produce energy in the most optimal manner, and full automation is planned so that their work can be controlled remotely.

Main effects of the project