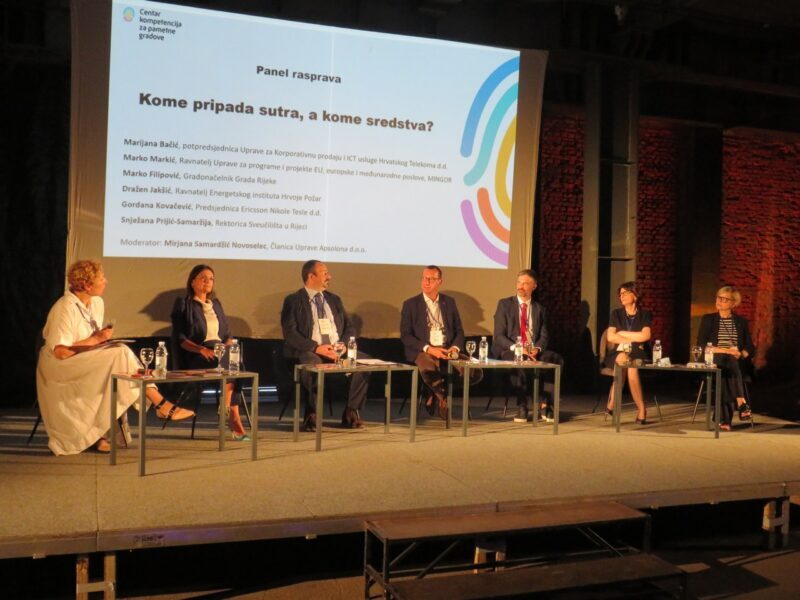 An introductory conference of the project “Competence Centre for Smart Cities – CEKOM”, an innovation cluster aimed at cooperation on research and development projects for innovative digital solutions for people living in urban areas, has taken place in the premises of Exportdrvo.

The Competence Centre for Smart Cities is the result of a joint application and elaboration of six research and development projects by 20 partners following a call “Support to the development of competence centres within the Operational Program Competitiveness and Cohesion 2014-2020.” 17 private and public companies and three institutions for research and dissemination of knowledge cooperate jointly on the project.

The project implementation started on 1 March 2020, but due to the epidemiological situation it was not possible to organise an introductory conference where the project and its objectives would be presented. Respecting the epidemiological measures, due to the pandemic, the partners carried out all the activities and arrangements regarding the project online, and now there is a possibility for a live meeting. For this reason, not only the project was presented at the conference, but moreover the project results achieved so far were presented, such as, for example, 50 newly created jobs or the entry of the research process into the TRL 3 level of technological development.

In their welcome speeches the conference was officially opened by Smart RI Board Member Tina Ragužin, Rijeka mayor Marko Filipović, Marko Markić, head of the Directorate for EU Programmes and Projects, European and International Affairs at the Ministry of Economy and Sustainable Development of the Republic of Croatia and former Rijeka mayor Vojko Obersnel.

Tina Ragužin said that the preparation of the project had lasted for five years. The project has been implemented for a year in the conditions of the corona crisis, which required some adjustment, but nevertheless everything is going according to plan. “The concrete results of the project are already visible and I am convinced that all the set goals will be achieved within the set deadline,” said Ragužin. 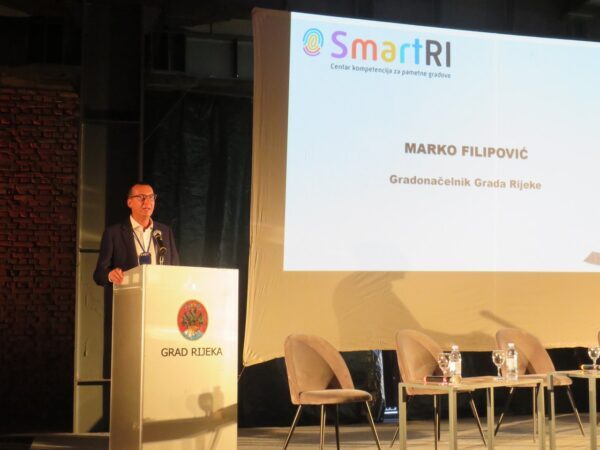 Mayor Filipović pointed out that a decision had been taken at EU level to make digitalisation the foundation on which the European economy would develop over the next seven years, which was clearly defined in the European budget proposals. “Precisely for this reason, it is important that cities recognise cooperation with businessmen, the University and the Innovation and Science Centres, and I can say that Rijeka is among Croatian leaders. This is proved by the fact that we have set up Smart RI, a separate company that is also a project applicant, but also by the fact that the utility companies of the City of Rijeka also take part in the project.

The head of the Directorate for EU Programmes and Projects, European and International Affairs at the Ministry of Economy and Sustainable Development, Marko Markić, pointed out that the cooperation of public companies and scientific institutions as well as private entrepreneurs was the capital leading us in the right direction.

Former Rijeka mayor Vojko Obersnel said that Rijeka had always been prone to innovation. I tried to encourage projects that promote the development of information technology, digitalisation of the city administration and utility companies. I am sure that a whole range of new innovative solutions will emerge from this project relating to IT and digitalisation of various processes ranging from traffic management to water distribution “, concluded Obersnel.

Panel discussion titled “To whom does tomorrow belong, and to whom the funds?”

The central part of the conference included a panel discussion titled “To whom does tomorrow belong, and to whom the funds?”

One of the conclusions of the panel discussion was the importance of speed in placing innovative solutions on the market and reacting to changes and strengthening human capacities.

Over the next two years, as long as the project implementation lasts, the project partners will develop as many as 36 innovative products and services in the field of smart city technology with significant market potentials. The company Smart RI set up by the City of Rijeka is the project promotor and applicant of the project “Centre of Competences for Smart Cities”. Smart RI, and thereby the City of Rijeka, will become a test and demonstration centre for “smart” technologies, where pilot projects will be implemented to improve products and / or services to the level of readiness for commercialisation.