The City of Rijeka, together with its utility companies and societies, for a number of years has been implementing its energy policy aimed at sustainable energy development in the city territory based on the principles of environmental protection, energy efficiency, use of renewable energy sources and sustainable construction.

In this way, Rijeka has joined thousands of local authorities who have voluntarily committed themselves to achieving and surpassing the European Union’s climate and energy goals. By acceding to the Covenant in 2019, the City of Rijeka has committed itself to reducing CO2 (and, if possible, other greenhouse gases) emissions in its area by at least 40% by 2030 by using energy more efficiently and by using renewable energy sources.

Pursuant to the Covenant, and then the legal obligations that have come into force in the meantime, the City of Rijeka has been continuously adopting strategic and action plans for energy sustainable development.

The plans not only include the activities of the city administration and its affiliated utility companies, and societies, but they also consider the energy development of Rijeka through the synergy of public administration, economy and citizens. 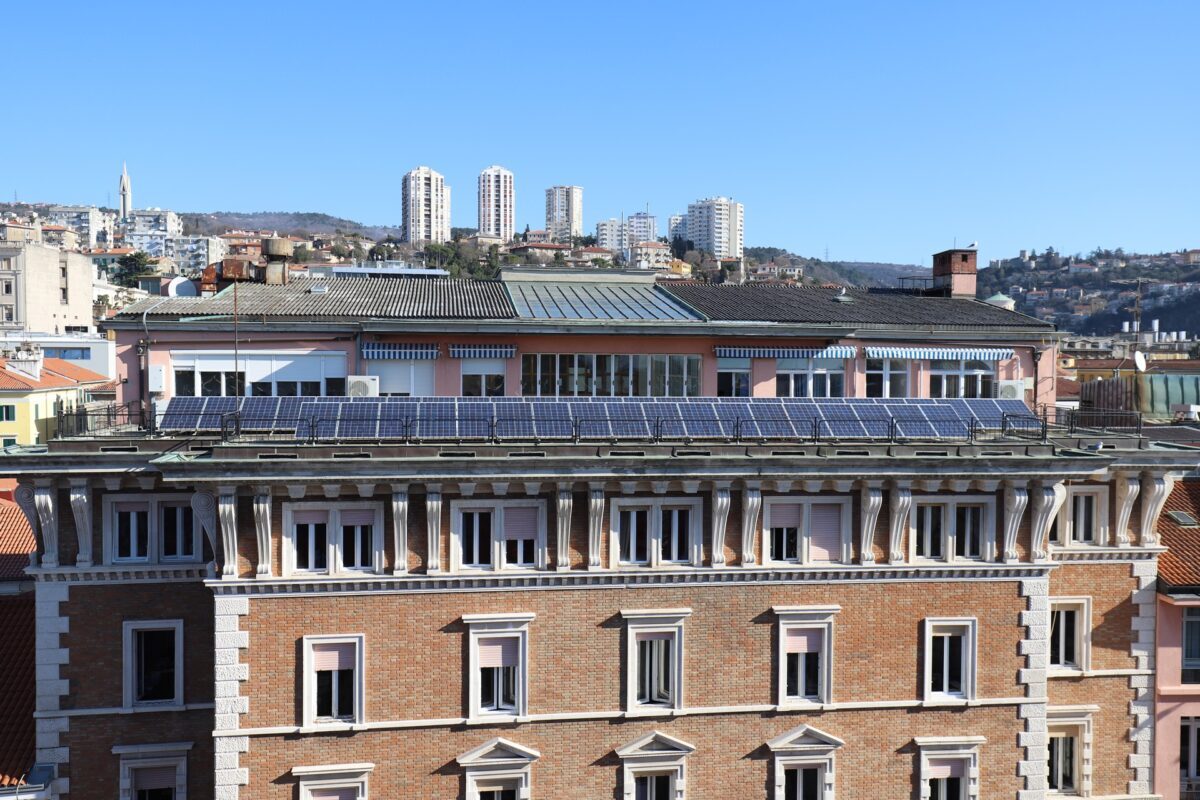 Through the iUrban project, components of the system for remote reading of energy and water consumption that is connected to the National Energy Management System (ISGE) have been built in in 16 buildings of the City of Rijeka. They continued to be built in as an integral part of the energy renovation of public purpose buildings, so that now 27 buildings form part of the remote reading system.

Also, in the administrative building of the City on Tito Sq, all lighting fixtures were replaced with more energy-efficient lighting, which enables up to a 50% reduction in electricity consumption for lighting and up to 30% better lighting.

Energy certificates of public buildings are continuously being prepared. The energy audit determines the manner of energy use, areas of energy waste and identifies measures to increase energy efficiency, as well as the state of buildings. So far, 1,568 energy certificates have been issued.

In Rijeka, which covers only 44 sq km, there is no possibility of accommodating large wind farms or large photovoltaic power plants, but there are examples of smaller plants for the production of electricity from renewable energy sources.

Thus, in cooperation with the Fund for Environmental Protection and Energy Efficiency, the project “Solar energy in the city” was implemented, within which seven photovoltaic power plants were built on buildings owned by the City of Rijeka and the project “Green energy in my home” where the City of Rijeka co-financed the project in the amount of 40% for the purchase of renewable energy systems for heating and preparing hot water for Rijeka citizens.

The City of Rijeka is strongly committed to environmentally sustainable development, so it plans all its projects, especially new ones, by taking into account energy efficiency. Thus, a 30 kW photovoltaic power plant was installed in the Mavrica Kindergarten, which uses the produced energy in the premises, as well as solar panels for preparing hot water. In 2018, kindergartens Đurđice and Morčić were built according to the principles of low-energy construction with solar panels for hot water (central laundry and central kitchen for kindergartens in that part of the city), and solar panels were installed on the Potok Kindergarten, which also has central laundry. Srdoči Kindergarten is certified with the most energy-efficient label, where a photovoltaic power plant with an installed capacity of 10.2 kW has been in function.

Since 2017, a plant for the production of electricity from landfill gas has been in operation at the rehabilitated and closed Viševac landfill, which reduces the emission of landfill gases because they are used in the production of electricity. The project is economically viable and has positive effects on the environment and living conditions of the local population.

Energy efficiency is of particular importance for buildings, given that buildings are the largest single consumers of energy and today represent great potential for energy, economic and environmental savings.

The implementation of these projects reduces CO₂ emissions, reduces energy consumption in public sector buildings, creates a favourable microclimate for work, extends the life of the building, reduces costs for building maintenance and financing of energy consumption and contributes to economic development in the amount of these investments.

Since 2016, the City of Rijeka has been implementing the project of energy renovation of buildings owned by the City, primarily elementary school and kindergarten buildings, for which significant funds from EU funds have been drawn down. So far, 15 buildings have been renewed, and 6 renovations are underway.

The same goals were recognized by Rijeka citizens, and this is visible thorough the highest number of renovations of condo buildings in Croatia.

An energy audit of public lighting in the City of Rijeka has been prepared, which is carried out once every five years in accordance with the law.

With the aim of reducing traffic CO2 emissions, protecting the environment and improving air quality in the city, as well as providing better transport services to citizens, the utility company Autotrolej, with the support from the state and EU funds, has been continuously purchasing new buses. Thus, from 2013 to 2018, 40 buses powered by compressed natural gas were purchased, while by 2021, 54 more buses are planned to be purchased.

The main results of energy efficiency transport projects are a reduction in CO₂ emissions and emissions of other exhaust gases, use of cheaper fuel (about 25% compared to diesel fuel and gasoline), a reduction in traffic noise, an increase in public transport standards for citizens (buses are equipped with cooling devices and ramps for people with disabilities).

In the period 2016-2019 (phase I) 4 km of hot water network was renewed out of a total of 12.5 km of dilapidated hot water network older than 40 years. In the second phase of the renewal, it is planned to renew the remaining 8.5 km of the hot water network of the heating system in Rijeka, which would restore the entire system with new pre-insulated pipes with a significant reduction in energy losses. The project is a candidate for EU funding, i.e. the ITU mechanism for urban agglomerations.

Also, as part of the Futura project, 6,296 households installed heat distributors, and were co-financed by the City of Rijeka and the Fund for Environmental Protection and Energy Efficiency.

In order to inform, educate and raise awareness of citizens about the importance of reducing energy consumption and the use of renewable energy sources, the City of Rijeka in cooperation with partners, and as part of the European Energy Week organises the Rijeka Energy Week.

In 2013, in cooperation with the students of the High School of Applied Arts, “The Colouring Book for the Little Guardians of the Planet Earth” was prepared, which has so far been given as a gift to over two thousand preschool children.