The project envisages the building of a new wastewater purifier on Delta, of high second stage of purification, with biological processing of wastewater prior to the release into the sea and processing of sludge to the content of at least 90% of dry matter. The device will have a purification capacity for the load of the equivalent of 200,000 inhabitants.

Moreover, the project will finance the construction and reconstruction of about 217 kilometres of sewerage and 125 pumping stations, with simultaneous execution of works on approximately 100 kilometres of public water supply in two cities – Rijeka and Kastav and three municipalities – Viškovo, Čavle and Jelenje that form the territory of the Rijeka Agglomeration. Part of the sewer collection-conveyance system about 800 meters long, will be constructed in a part of the municipality of Matulji.

In the territory of the city of Rijeka, works take place in about 200 streets and will include about 82 kilometres of sewers and about 31 kilometres of the water supply system.

Troubleshooting of connection problems of those objects, newly built and existing ones, which are below the level of the sewage collector is also envisaged. The supply of a large number (2,512) of small local internal pumping stations is planned in order to connect those units to the public drainage system.

Rijeka Agglomeration – illustration of the routes 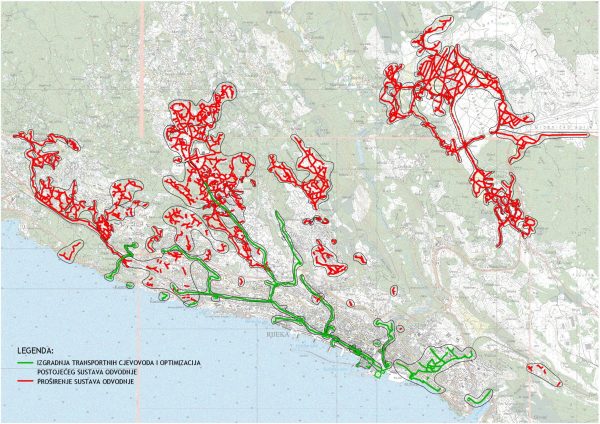 Project Goals are to:

Owing to the investments included by this project in water and utility structures European standards will be achieved in municipal wastewater management and protection of receiving surface water and the aquatic environment in accordance with the Urban Waste Water Treatment Directive (91/271 / EEC), which is one of the most expensive legal acts of the European Union in terms of implementation. Following this, good quality of drinking water is ensured in accordance with the Directive on the quality of water intended for human consumption (98/83 / EC) positively impacting the status of water bodies and ensuring the recipient’s good status in accordance with the requirements of the Water Framework Directive (2000/60/EC) and the Bathing Water Quality Directive (2006/7/EC).