The cranes are located on the Rijeka breakwater, an area that makes part of the protected Urban complex of the city of Rijeka.

The cranes are under the competence of and are owned by the Port of Rijeka Authority. 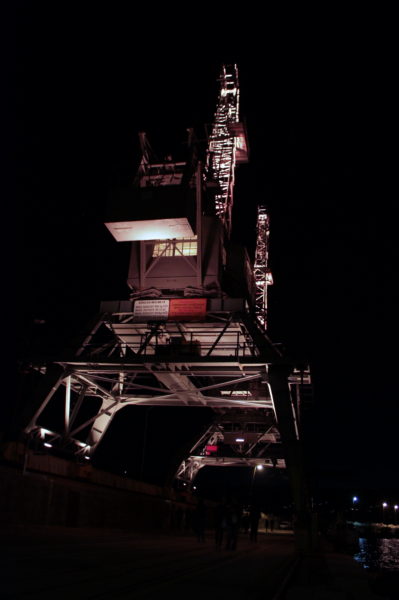 On the intervention of the City of Rijeka the restoration and rehabilitation of the cranes was initiated that lasted from 2010 to 2014. The programme was realised under the supervision of the competent Department of Conservation.

The City of Rijeka co-financed the project with the funds collected on behalf of the monument annuity in the amount of HRK 1,896,450.00.

Upper movable parts of the cranes were replaced with suitable parts from other cranes owned by the Port Authority since those located on the breakwater were in a very bad condition. Rehabilitation was completed in 2013.

The cranes are equipped with reflectors with LED light sources RGB that have a possibility to produce various colours of several intensity levels. Significant dates are marked with particular colour lights.