The City of Rijeka, together with 14 European cities, uses advanced technologies to improve the services it provides to citizens and the economy in order to stimulate economic growth, create jobs and increase the quality of life.

By using advanced technologies 15 European cities will improve the services they provide to their citizens and the economy.

The Digital Cities Challenge (DCC) is an initiative launched in October 2017 as part of the COSME programme aimed at small and medium-sized enterprises and is a joint initiative of the European Commission and the European Committee of the Regions, an EU advisory body representing interests of EU regional and local self-government.

At the beginning of January 2018, the City of Rijeka submitted an application for participation in the DCC initiative with the support of local partners: the University of Rijeka, StepRi – Science and Technology Park of the University of Rijeka, Smart Ri, Rijeka 2020 -European Capital of Culture, Rijeka Development Agency Porin, PAR – High Business School, the Polytechnics of Rijeka, MIPRO Association, CTK – Centre of Technical Culture Rijeka, CIP PAR – Centre for Innovation and Entrepreneurship. Following its participation in the tender, the European Commission selected the City of Rijeka as one of 15 cities, out of a total of 92 registered cities from 23 Member States. The project details are available on: https://www.digitallytransformyourregion.eu/

The aim of the initiative is to help selected European cities to use advanced technologies to improve the services they provide to their citizens and the economy. It is believed that the 15 cities involved will boost their economic growth, create new jobs and increase the quality of life and work in their territories.

By participating in the initiative, the City of Rijeka committed itself to building and adopting city policies related to the digital transformation of the city by September 2019, in cooperation with the general public, academic and private sectors.

What is the Digital Cities Challenge? 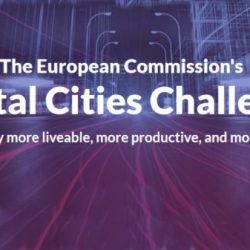 The programme is launched by the European Commission in 2017 with the aim of helping 41 European cities in the development and implementation of digital policies. All participating cities received assistance from professionals, access to tools, training and workshops to build local capacity and, most importantly, a common learning platform that facilitates dialogue and cooperation.

The initiative included a network of 41 cities, including 15 cities that were selected (selected among 92 candidates, including Rijeka), 20 cities that monitor programmes using their own resources and 6 mentor cities that share success with the group. Participating cities have developed their digital strategies during the project and they envisage to implement them.

Beneficiaries of the project results

Business entities operating in the territory of Rijeka, citizens

Financial value of the project and sources of funding

The costs of consulting services and all material costs are 100% financed by EU funds, under the Programme for the Competitiveness of Enterprises and small and medium-sized enterprises.

Link to the Strategy of the City of Rijeka

STRATEGIC OBJECTIVE 2 To develop a competitive economy on the basis of a knowledge society and new technologies
PRIORITY 2.2. Strengthening the competitiveness of the economy
MEASURE 2.2.3. Economic development based on new technologies

The event hosted more than 400 speakers – policy makers such as Mark Markkula, First Vice-President of the European Committee of the Regions, industrial and business leaders such as Pauline Harrivaar of Robocoasts and prominent academics, including Pierre Alexandre Balland.

In his speech, the Mayor of the City of Rijeka, Vojko Obersnel, emphasised that the City of Rijeka would harmonize the strategic goals defined within the Digital Cities Challenge project with the Integral Development Plan for Sustainable Development of Rijeka for the period after 2020, which is currently being drafted and which needs to be harmonised with the national strategy which was in its final stages of drawing up.

All documents and activities carried out by the City of Rijeka are available on the project website: https://www.intelligentcitieschallenge.eu/cities/rijeka