Establishing a new integral system of waste management in the Primorje – Gorski Kotar County includes the construction of the County Waste Management Centre and five transhipment stations located at the sites serving up to now as landfills on the islands of Krk, Cres and Rab and in Novi Vinodolski and Delnice, as well as the rehabilitation of all existing landfills. 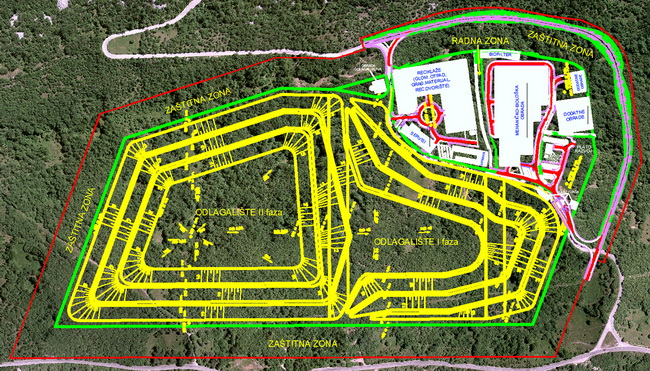 At the County Waste Management Centre Marišćina, by applying mechanical and biological treatment of unsorted waste, collected waste will be permanently isolated, and thus reduced its environmental impact. The final goal is to minimise waste quantity, by applying high standards in environmental protection, whereby reducing the quantity of waste to a minimum.

The construction of the Waste Management Centre takes place in several phases. In the first phase the disposal plant has been constructed, as well as the mechanical and biological waste treatment plant, the wastewater treatment plant, service facilities and the administration building. The first phase of works on Marišćina started in March 2013.

In accordance with the second application modification relating to EU funding grants, accepted in January 2013, the project is to be realised in 4 phases.

Table 1: Activities and values in the construction of the integral waste management system in the Primorje – Gorski Kotar County

Table 2: Structure of funding sources in accordance with the construction phases of the integral waste management system in the Primorje – Gorski Kotar County

The contract providing national co-financing of the so called Phase 1 was signed on 30 May 2011 and an annex to the Contract on 11 June 2013. The structure is visible in Table 3. FZOEU will co-finance EUR 2 million, while the County, the City of Rijeka and EKOPLUS will provide EUR 8 million. EKOPLUS took part in the construction of the mechanical and biological waste treatment plant (worth EUR 13 mio) with 29% of borrowed funds, while the residual amount is an EU grant.

70.95% i.e. EUR 26 million is a grant under IPA assigned to the project on the basis of the second application modification approved with the Decision of the European Commission on project co-financing taken in December 2012 (whereby participation in co-financing increased from 45.28% to 70.95%).

The EU funds take part in project realisation with 70.95%, the national co-financing of the Energy Efficiency and Environmental Protection Fund with 5.5 %, while local co-financing through borrowed and budgetary funds (Ekoplus, County, City of Rijeka) with 23.55 %. Within the approved funds, co-financing includes the following contracts:

Within the establishment of the new system of waste management in the Primorje – Gorski Kotar County the existing landfills will undergo rehabilitation. The Viševac landfill has been officially closed.

The party responsible for the construction and management of the Centre and transhipment is Ekoplus, company dealing with waste management, established in 2001 by the Primorje – Gorski Kotar County, the City of Rijeka and utility company Čistoća from Rijeka with the main task to devise, prepare, construct and manage the new, integral system of waste management in the territory of the whole County. In 2006, the Commune of Viškovo, in which territory the Centre is being built, entered into the ownership structure.

Due to certain modifications concerning waste composition determined in 2012 by the contractor’s examination of waste composition, which was his obligation, certain parts of the mechanical and biological waste treatment plant and the wastewater treatment plant underwent a redesign. Due to the mentioned, the deadline was extended for 135 days by the Supervisor whereby the planned assumption of works and their beginning was postponed to September 2014.

At the beginning of July 2015, the Ministry of Construction and Physical Planning carried out technical survey in Phase 3 at the building site of the County Waste Management Centre Marišćina, relating to disposal fields as a precondition for the beginning of hot commissioning and trial operation of the Centre.

It is expected that a temporary licence for use would be issued for waste disposals for products coming from plants processing municipal waste. In the past period tests were carried out at the site of all parts of equipment and of mechanical and biological waste treatment systems, wastewater treatment appliance, and other integral parts of the plant in order to prove their correct functionality. Positive findings were also issued by Ex-Agency in respect of the remaining phases of the Centre.